(press declaration with the request for publication)

The deployment violates objectively the prohibitions of aggressive war and disturbs the peaceful coexistence of the peoples (art. 26 Basic Law, art. 2 par. 4 UN Charter). In June 2016, the protest by the Syrian government has proven, that it rejects the deployment which has neither been requested by it nor been coordinated with it. Also the parliamentary reservation (art. 115a Basic Law) is violated, because the consent of the Bundestag had also to be requested before the EU resolution of the 16./17.11.2015 (file number 1420/15) on the case of mutual defence. Furthermore, the EU clause on mutual defence (art. 42 par. 7 TEU) has not been valid yet, because, as already the Lisbon Judgement of the 30.06.2009 has established, before that the EU would have to conclude, that it wants a common defence policy, which then would need the consent by the national parliaments of all EU member states (art. 42 par. 2 subpar. 1 TEU). At least the latter has never happened. In addition to that, without a valid clause on mutual defence, the EU is no system of mutual collective security; the Bundeswehr may be deployed in combat only for the defence of the own country and within the scope of systems of mutual collective security (art. 24 par. 2 Basic Law). And the international alliance in the fight against Isis is an ad hoc – alliance without any ratified treaty and so obiously without any clause on mutual defence. Also the Syria resolutions of the UN Securtiy Council do not legalize the deployment, because they do just not state according to art. 42 UN Charter, that peaceful means had remained unsuccessful or hopeless, because they particularly for that reason do not give any authorization for military means, but in the contrary, set on negotiations and on ever harder sanctions against Isis, against Al Qaida, and against ever more groups of their supporters.
The terrorist attacks in Paris of the 13.11.2015 have been below the treshold of a militarily armed attack. The resolution on the case of mutual defence has de facto only disattracted a significant part of the public and of the politicians from the fact, that the Syria deployment is a military intervention
for values and interests (art. 42 par. 5 TEU) and for crisis intervention (art. 43 par. 1 TEU) – corresponding with the ideology of the „humanitarian intervention“. That ideology has developed from the study „Self Determination in the New World Order“ of the year 1992 by the think tank Carnegie Endowment for International Peace, and it aims provenly on making outflankable the prohibition of aggressive war (art. 2 Abs. 4 UN Charter) and the responsibilities of the UN Security Council. The ideology of the „humanitarian intervention“ has been, in the last 24 years, responsible for „colour revolutions“ and for wars including for the nearly escalation of the Syria conflict into a world war, which has been very narrowly averted at the 31.08.2013.
Weiterlesen »
Eingestellt von UNSER-POLITIKBLOG von Sarah und Volker um 10:55 Keine Kommentare: 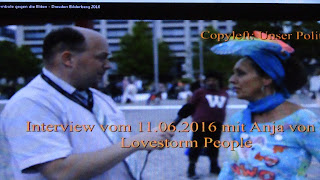 Constitutional judges remain silent on Syria deployment of the Bundeswehr, which is unconstitutional and incompatible with international law, and deny the German population any protection against the danger of world war and against the jihadist „blitzkrieg“, which has been prognosticated for Germany and Europe for 2016

After the press conference of the 12.06.2016 in Dresden, the plaintiff now addresses herself to the public also in writing.

At the 17.03.2016, the civil and human rights activist Sarah Luzia Hassel-Reusing has filed a Constitutional complaint (file number 2 BvR 576/16) against the resolution by the Bundestag of the 03.12.2015 (file number 18/6866) on the Syria deployment of the Bundeswehr. The seven applications of the complaint have demanded to prohibit the German Syria deployment, to impose on the members of the Bundestag (as far as foreign and safety policy are concerned) appropriate criteria for the self investigation of their conscience prescribed in art. 38 par. 1 s. 2 Basic Law, to biometrically register all immigrants, who have come to Germany since 2015, to appropriately limit the power of think tanks over Germany in the area of foreign and safety policy (in order to protect the Basic Law and the UN Charter), to restore the ability of Germany to defend its whole territory against the danger of a jihadist attack, to completely limit the prescriptions of the TEU on safety policy with an interpretation in conformity with the Basic Law and with the UN Charter, and to oblige, for that purpose, the Federal Government to get an advisory opinion by the ICJ, or to state, according to art 53 VCLT, the voidness of the TEU because of incompatibility with the UN Charter.
The Constitutional Court has made provisions in the Lisbon judgement to limit the Common Foreign and Safety Policy (CFSP) of the EU, which have made possible the enactment of the Lisbon Treaty without the TEU getting void. Those provisions have been disregarded by the EU Council of Ministers (incl. by the German Defence Minister) at the 16./17.11.2015 (file number 14120/15) and by the Bundestag at the 03.12.2015 (file number 18/6866).

At the 12.04.2016, the 3rd Chamber (Constitutional judges Prof. Dr. Huber, Müller, and Dr. Maidowski) of the 2nd Senate of the Constitutional Court have unanimously concluded not to admit the Constitutional complaint and referred for that to art. 93a and 93b BVerfGG. An explanation for the non-admittance has not been given. The non-admittance has, according to the post stamp, been sent at the 14.04.2016, and it has reached the post box in the morning of the 15.04.2016.

According to art. 93d par. 1 s. 3 BVerfGG, a resolution on a non-admittance does not have to be explained. Art. 93a BVerfGG determines as a „must“ prescription, depending on which conditions a Constitutional complaint has to be admitted, namely if there is a personal affectedness regarding basic rights, or if the decisive legal questions are furthering the Constitutional jurisdiction. If a Constitutional complaint fulfills these conditions, it has to be admitted; if it does not fulfill them, it may not be admitted.
What the own, current, and immediate affectedness regarding basic rights, as a precondition of the admittance of a Constitutional complaint, means, has been explained in no. 78 of the aviation safety law judgement of the 15.02.2006 (file number 1 BvR 357/05). The condition of the own and current affectedness is basically fulfilled, if the plaintiff explains, that she, with a certain probability, is affected in her basic rights by the measures based on the tackled prescriptions. Immediate affectedness means, that the prescriptions change the legal position of the plaintiff already before any act of their implementation. This condition is also fulfilled, if the plaintiff cannot or cannot reasonably complain against an act of its implementation. According to these standards, the personal affectedness regarding the aviation safety law has been confirmed. The then plaintiffs had credibly explained, that they often use civil air planes for private and professional reasons.

So a non-admittance, even if it is issued without any explanation, always implies the silent allegation, that none of the invoked affectednesses regarding basic rights and human rights, or none of the invoked decisive legal questions for the furthering of Constitutional jurisdiction were given.