Again increasing risk of escalation to nuclear war in Syria - „humanitarian intervention“ must be tried at The Hague !

(with the request for publication)

Statement by a former constitutional plaintiff
by: Sarah Luzia Hassel-Reusing

Again an escalation in Syria to nuclear war is threatening because of a false flag chemical weapon attack, which is presumably in preparation. The ideology behind that would already have been outlawed, if we had a completely functioning rule of the law. 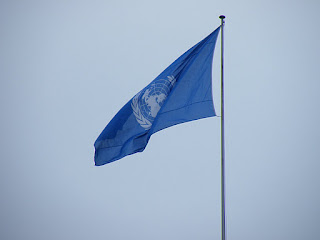 The ideology behind the „humanitarian intervention“
The ideology of the „humanitarian intervention“ originates from the study „Self-Determination in the New World Order“ by the think tank „Carnegie Endowment for International Peace“ of the year 1992.
The study „Self-Determination in the New World Order“ aims at more interventions incl. military interventions by the USA and its allies, disattracting from the legal limits, which are set by the sovereignty of the states (art. 2 par. 1 UN Charter), by the prohibition of aggressive war (art. 2 par. 4 UN Charter), by the prohibition of interference into inner affairs (art. 2 par. 7 UN Charter), and by art. 29 no. 3 UDHR, which prohibits, in order to serve peace, the instrumentalization of the universal huamn rights against the UN Charter. For this purpose, the think tank refers to the right of the peoples to self-determination (art. 1 Uno Social Pact, art. 1 UN Civil Pact, art. 1 no. 2 UN Charter) and ignores the UN General Assemlby resolution 2625 of the 24.10.1970 on principles under international law regarding friendly relations and cooperation between the states, which has already regulated the area of tension between the right of the peoples to self-determination and the sovereignty of the states. For the purpose of its concept, the study the term „people“ to any group, which objectively or (according to the opinion of its members) subjectively is different from others regarding ethnic, linguistic, religious, or cultural ties (p.47+48). It differentiates self-determination movements (p. 49-52) between anti-colonial, sub-state (strife for autonomy or separatism), trans-state (separatism affecting the territories of several states), self-determination of dispersed peoples, Indigenous self-determination, and representative self-determination (for more representative democracy).
The study recommends to the USA as possible ways of action (p. 73), a) to remain neutral, b) to support the government of the other state against the strifes for self-determination, c) to convince the government of the other state to approach the self-determination movement, d) to grant to the self-determination movement a certain amount of recognition, e) to support territorial autonomy, or f) to support secession combined with conditions imposed by the USA for the recognition of the new state and of its government.
The study recommends, that the USA even should not shy away from such self-determination movements, which apply violence against a suppressive government (p. 79), and that it was not necessary to demand any proof, that the government has already resorted to violence.
It also says, that, for the purpose of prevention of civil wars, it could be compelling to recognize secession movements as governments and to lobby internationally for the recognition of their secession (p. 80).
Regarding the support to states coming into existence, the study recommends to differentiate, if one recognizes the new state and its governments, or, in a first step, only one of the both (p. 83). It recommends as criteria for the recognition of a new state (p. 84-93) the UN admissibility criteria, if the leaders of the new state promise adherence to the international law, respect for the inviolability of state borders, relinquishment of use of force contrary to international law, peaceful settlement of arguments, constitutional democracy, right to a differing political opinion, protection for the rights of individuals and of minorities, limits to police arbitrariness, market-oriented economy, and subjugation under an enforcement mechanism. The study imaginates the latter in the way, that the new state authorizes the UN Security Council or a regional organization to militarily intervene into the new state, if it does not comply with the above-mentioned recognition critieria recommended by that think tank, and to perhaps be entitled to occupy the new state up to 5 years in order to enforce the criteria (p. 91).

It regards as methods of intervention (p. 96) surveillance, diplomatical pressure, refusal of international legitimacy (according to p. 101+102 incl. exclusion or suspension of the membership of the respective country in international organizations, as well as refusal of recognition of the government and instead recognition of a rival government), conditionality in the development aid, economic sanctions, and military interventions.
The study regards as reasons for military interventions (p. 105-111) the prevention of an armed conflict (e. g. for the protection of minorities or for the deterrence against external attacks against a new state), violent enforcement of humanitarian relief to civil populations under siege (according to the to the assessment at p. 107 of the study the in future possibly most common purpose of collective military interventions into internal conflicts of any kind !), defence of a new state, support to the self-determination movement, enforcement of the compliance with the criteria for the recognition of the new state (on the basis of the consent demanded before the recognition, p. 110), and the defence of the existing government.
Weiterlesen »
Eingestellt von UNSER-POLITIKBLOG von Sarah und Volker um 22:46 Keine Kommentare: