At first the chronology:

Unknown perpetrators attack from a lorry the US military base in Kirkuk with a Fadjr-1 rocket of Iranian design, thus killing a US subcontractor and violating several US soldiers. These rockets are not only in the possession of the armies of Iran, Iraq, and Syria, but also of various jihadists, who have captured them in Syria or Iraq. These rockets have, according to Southfront, even already been sighted with militants in Afghanisten.
(Southfront article „Photos reveal Iranian-made rockets used in deadly attack on U.S. Base in Iraq“ of the 29.12.2019)

The US air force attacks 5 bases of Kata'ib Hezbollah, which are a part of the Iraqi People's Mobilisation Units (also called PMU or Hashd Al-Shaabi). The PMU include several Shia units and are under the command of the state Iraq. 25 persons are killed, and 51 are violated.
(Southfront article „25 killed, 51 injured in US strikes on Kataib Hezbollah positions in Syria, Iraq“ of the 30.12.2019)

A US airstrike on the airport in Baghdad kills general Qassem Soleimani, Mahdi al-Muhandis (the vice commander of the PMU), and several further officers.
(Southfront articles „War is coming: US strike assassinated Qods Force's Soleimani. Iran promised 'tough revenge' “ and „Four senior Iranian officers killed in U.S. Attack to kill Soleimani: Qods Force“, both of the 03.01.2020)

Unknown perpetrators attack the PMU in the night of the 03.01.2020. Colonel Myles B. Caggins III informs the world public on behalf of the International Alliance in the Fight against Isis (an ad hoc alliance, which has been formed in 2014 under the leadership of the USA), that this attack has NOT come frome the USA.
(Southfront article „Updated: New Wave of airstrikes hits Iraq Capital“ of the 04.01.2020 and Al Masdar News article „US denies carrying out attack that killed 6 members of Hasd Al-Shaabi“ of the 04.01.2020)

There is a debate in Iran on how should be taken revenge for the killing of general Soleimani. In this context, a high-ranking IRGC commander states, that 35 American targets and also the Israeli capital Tel Aviv are within the reach of Iranian rockets (Southfront article „IRGC Commander says 35 U.S. Targets, Tel Aviv within Iran's reach“).

In the late evening of the 04.01.2020, rockets hit in Baghdad near the US embassy and North of the capital at the Balad airforce base. At first, it is not reported, if people have been killed or violated. Soon after these attacks, Kata'ib Hezbollah demands the Iraqi army not to position itself protective before US bases and to hold at least 1,000 meters distance to them. The Southfront article does, however, NOT say, that Kata'ib Hezbollah had claimed any responsibility for these rockets attacks.
(Southfront article „Rocket attacks target U.S. Embassy, military base in Iraqi capital“ of the 04.01.2020)

Also late at the 04.01.2020, there are attacks with rockets on the PMU units near the Iraqi – Syrian border on Syrian territory. Also for these acts, at first noone claims responsibility.
(Southfront article „Mysterious airstrikes target PMU camp near Iraqi-Syrian border – reports“ of the 04.01.2020)

US President Donald Trump now threatens with very hard and fast retaliation for any further Iranian attack on American citizens or installations. The USA have for this purpose, according to his statement, chosen 52 Iranian targets, some of them of highly cultural importance.
(Southfront article „Trump threatens to attack 52 Iranian targets, some of them 'important to Iranian cultural' “ of the 05.01.2020)

At the 05.01.2020, the Iraqi Parliament has, urged by the Iraqi Government, concluded to expel all foreign troops. This refers in particular to the „political murder“ on general Soleimani committed by US troops on Iraqi soil.
(Sputniknews article „Iraks Parlament stimmt für Aufkündigung des Abkommens mit USA und für Abzug ausländischer Truppen“ of the 05.01.2020 and Southfront article „Iraqi Parliament voted to expel US forces and close airspace for US-led coalition“ of the 05.01.2020).

In the evening of the 05.01.2020, again rockets hit close to the US embassy in Baghdad without anyone claiming responsibility for the attack.
(Southfront article „In video: more rockets hit US embassy area in Baghdad's green zone“ of the 06.01.2020)

It is still unclear, who has attacked the US base at the 27.12.2019. This could be of crucial imporance for the question, who wants to lure USA and Iran into war.

The Iraqi public prosecution authorities have the responsibility to clear up these crimes, as far as they have been committed on Iraqi soil or through Iraqi airspace. Also Americans and Iranians have to respects this. 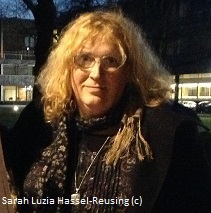 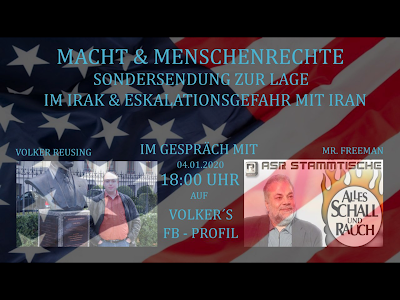